Some Employers Are Turning to Crypto to Assist Ukraine Employees 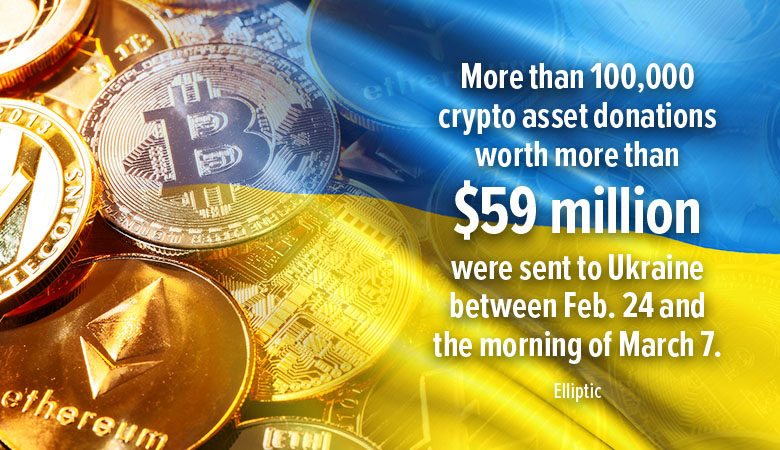 As Russia continues its brutal military campaign in Ukraine, which it launched two weeks ago, several financial themes have emerged. One is the growing list of U.S. companies cutting off ties with Russia, with McDonald’s, Starbucks and Coke being the latest to join the list of nearly 300 companies..

Another theme is the role cryptocurrency is playing.

Ukraine’s official Twitter account announced on Feb. 26 that the country was accepting donations in the form of bitcoin, ethereum and the stablecoin tether — several days later it added polkadot and dogecoin to the mix. As a result, more than 100,000 crypto asset donations worth more than $59 million were sent to Ukraine between Feb. 24 and the morning of March 7, according to blockchain analytics firm Elliptic.

Some tech companies in the U.S. are also turning to the decentralized digital currency as a form of payment for their Ukrainian employees, as some banks across the war-torn country have been electronically shutdown by Russian cyberattacks. Ukraine has become an emerging talent market for tech professionals, according to MarketWatch, which has brought this issue to the forefront for many tech organizations.

“What attracts U.S. tech companies besides Ukrainian talent is the fact that it is a fast growing digital economy,” Bhaskar Chakravorti, dean of global business at The Fletcher School, Tufts University, told MarketWatch. “It ranks 37th out of 90 countries on our digital momentum measure.”

Nathan O’Connor, managing director of Scottsdale, Arizona-based Equity Methods, an HR advisory and financial reporting company, noted that the main appeal for employers paying their Ukraine-based employees in bitcoin or ethereum — the two most prominent cryptocurrencies — is they could likely prove to be a far more reliable store of value during the war than the Ukrainian hryvnia or Russian ruble, which could or have collapsed in value. Thus, Ukrainian employees might find more long-term security in crypto, at least as a way to preserve part of their purchasing power, both in their local communities and in the scenario where they have to seek refuge in neighboring countries.

“If the company is paying them in their local currency [hryvnia] but they are forced to evacuate to another country due to war, there’s uncertainty surrounding how the [hryvnia] will be valued at their new destination. By contrast, we know bitcoin will already have a recognized value and price associated with it in the destination country’s currency,” said O'Connor, who presented at WorldatWork’s “2021 Total Rewards Conference and Exhibition” on the topic of cryptocurrency and its potential compensation use case for employers. “It’s true bitcoin is volatile, but in a war zone, it might be much less volatile than the fiat currency alternatives that are readily available.

“If I’m holding bitcoin, today I can reasonably expect to get at least some value for that on the other side of any border, at least for the foreseeable future. However, if I bring [hryvnia] to exchange for currency in a destination country, I’d expect either a bad exchange rate or not to have it accepted for exchange at all. That’s because due to the war, it’s not clear from the exchange’s perspective whether the [hryvnia] will survive. Bitcoin gets you around all of those kinds of concerns.”

Another benefit is cryptocurrencies are completely digital, which means they’re weightless. Employees paid in crypto could carry it easily inside their phone, instead of having to lug around physical cash, which is relatively heavy.

“In an evacuation scenario, this really matters, because you might only be able to carry one backpack of belongings with you when you flee,” O’Connor said. “You may not have the ability to carry large amounts of paper money with you inside a war zone.”

Ultimately, O’Connor said, organizations with employees based in Ukraine should listen to what their employees on the ground are telling them they need, and then adapt payment methods accordingly if possible.

“For employees hunkering down in Ukraine, cryptocurrency will only be valuable for them to meet daily needs if the stores and vendors they interact with are able to accept it,” O’Connor said. “If the local farmer or grocer in my town can only accept [hryvnia] in exchange for food, then I’ll need [hryvnia] to feed my family. If they will only accept U.S. dollars, then I’ll need U.S. dollars. Given the dynamic nature of the situation, only the employee on the ground can tell you what form of compensation they need most, and that can vary from town to town across the country.”

The war is at a fever pitch in some areas of the country, meaning both internet and electricity could be compromised, both of which must be present to reliably access crypto payments. For tech-savvy, highly sophisticated users operating in controlled environments there may be some workarounds out there, O’Connor noted, but those workarounds are likely out of reach for average users operating in a war zone. However, employees might nonetheless prefer bitcoin and/or ethereum’s future value over the immediacy of the hryvnia. Diversification may be valuable, depending on conditions on the ground and the employee’s near-term plans to either shelter in place or evacuate.

“Keeping communication open and frequent becomes vitally important in a situation like this, as employee needs can change rapidly, either as their own location changes on a day-to-day basis, or as the war evolves around them,” O’Connor said. “All a company can do is the best it can to listen and then respond quickly to what its employees are asking for. Beyond that, there’s no guarantee. There never is in war.”

Some analysts have noted that the war in Ukraine could serve as an inflection point for cryptocurrency. Crypto in recent years moved from a fringe technology to the kind of mainstream industry that pushes multiple Super Bowl ads from companies backed with hundreds of millions of dollars of investment, noted NBC News. The underlying blockchain technology relies on distributed computing power to create public and unbreakable digital ledgers that can track who owns what without a central authority.

The decentralized aspect that has drawn many to crypto is now under a spotlight as Western powers have wielded financial sanctions against Russia. This has caused Russian citizens to turn to crypto as the ruble continues to plummet in value. As a result, various crypto exchanges have been pressured by the U.S. government to enact similar restrictive measures on their platforms against Russian users to further increase domestic pressures — some of which have obliged.

The war has thrust the issue of government regulation of crypto assets into the spotlight, which is a key reason why the digital currency hasn’t caught on as a mainstream form of compensation at organizations. That could soon be changing, as President Joe Biden signed an executive order on Wednesday directing federal agencies to study cryptocurrencies and laying out a national policy to guide development of new regulation surrounding digital assets and explore development of a Central Bank Digital Currency (CBDC).

“We still don’t know how a new CBDC will impact the value of current crypto-assets, and the impact new regulations will have,” O’Connor said. “There are also a host of legal, tax-related, and communication issues, so right now it’s potentially onerous for employers to give out crypto to employees without first understanding fully all the implications.”

O’Connor added that on top of the regulatory issues and tax implications, organizations must also purchase crypto and own it as an intangible asset before they can begin issuing it as a form of compensation, which has accounting implications. Also, many organizations are still weary of the volatility that is still associated with bitcoin, which after hitting a high of $67,553 in November, is now hovering around $40,000.

“Companies are naturally a bit hesitant to compensate employees using an asset that can decline in value so dramatically over such a short span of time. That’s part of why we haven’t seen a massive push among companies to go out and make bitcoin a component of the overall compensation package,” O’Connor said. “It’s true there are examples of companies out there providing bonuses and incentive compensation in the form of crypto, but for the most part, companies are still in wait-and-see mode on this concept.”