Sorry, you can't add this item to the cart.
You have reached the maximum allowed quantity for purchase in your cart or the item isn't available anymore.
Product successfully added to your cart!
Price
*Login in to see member price
View your cart
Continue shopping

Thank you for your interest in WorldatWork articles and publications. To order full copies of WorldatWork publications, please contact Customer Experience Team or call 877-951-9191 (United States and Canada) or +1 480-951-9191 (Outside US).

As job losses from COVID-19 were already mounting in the United States in mid-March, Marsh & McLennan president and CEO Dan Glaser became one of the first executives to pledge to his workers that there would be no layoffs at his company.

“I want to say to all of you that while we are in the thick of this global pandemic, your job is secure,” he said in a video message to the company’s 76,000 global employees, including workers in its insurance and risk management, human resources, management consulting and reinsurance brokerage businesses. “There will be no counting of sick days or vacation days until things return to normal.”

“I want to say to all of you that while we are in the thick of this global pandemic, your job is secure." - Dan Glaser, President & CEO, @MMC_Global https://wapo.st/3dMCPEt  #Coronavirus #economy 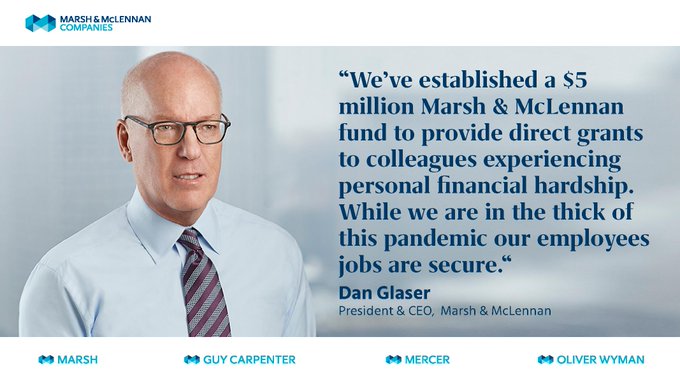 29 people are talking about this

Laurie Ledford, senior vice president and chief human resources officer, said since Marsh & McLennan is a global business, they were in-tune to the effects COVID-19 was having on employees in Asia and Europe, which led to the “no layoffs” decision before most employers in the U.S.

“It became clear that we needed to work quickly to offer our colleagues the best possible assurances and support,” Ledford said. “We are a brains business and knew that if our colleagues felt supported, they would be better positioned to do the best they could for our customers and clients during this trying time.”

In addition to a promise of job security, no counting of sick days or vacation days and flexibility in how and when people work, Marsh & McLennan also established a $5 million fund that offers grants to employees facing financial hardship and reminded people of the “formidable resources and financial strength” of the company.

“We have set up support funds for our colleagues impacted by natural disasters in certain regions before,” Ledford said. “When this situation unfolded, it just made sense to do this again, but on a bigger, global scale.”

Since Glaser’s pledge to his employees on March 19, many other companies have made similar “no layoff” pledges in an effort to #KeepTheWorldatWork. Ledford, borrowing a phrase from Mercer leadership, a Marsh & McLennan business, said that businesses should balance empathy with economics and “at a time when the world is hurting, we need more of this.”

While some of these companies are well situated to absorb the financial blow being dealt by COVID-19, it still signals a significant shift in corporate mentality.

“We’ve never seen this in any previous recession,” said Ravin Jesuthasan, managing director and global practice leader at Willis Towers Watson. “This idea of putting the workforce at the top of the list and being an explicit consideration alongside shareholders, which to me, has been really heartening to see.”

Richard Branson Offers Private Island as Collateral to Save Jobs
Billionaire founder of the Virgin Group, Richard Branson, said he would offer his Necker Island estate in the Caribbean while seeking a commercial loan from the United Kingdom government. Branson’s airlines, Virgin Atlantic and Virgin Australia, like many airline companies, are drowning amid the massive decline in travel because of COVID-19 restrictions.

Charter Communications Promises No Layoffs for 60 Days
Charter Communications, which operates Spectrum cable and internet, promised earlier this week that it will not lay off or furlough any workers for at least the next 60 days. The company said it is planning wage increases for all hourly workers from $15 to $20 over the next two years, with immediate increases of $1.50 an hour for frontline field and customer operations employees.

Nvidia Promises No Layoffs, Offering Raises
Jensen Huang, CEO of tech company Nvidia, announced that the company won’t be laying off any of its employees or asking them to accept pay cuts as a result of the coronavirus epidemic. In fact, the company is giving raises to all of its employees to provide additional financial security during the crisis.

See the full list of organizations WorldatWork has identified as a part of our #KeepTheWorldatWork campaign. If you know of a company we missed, email us and we'll add them to the list.

Brett Christie is the managing editor of Workspan Daily.

WorldatWork is a professional nonprofit association that sets the agenda and standard of excellence in the field of Total Rewards. Our membership, signature certifications, data, content, and conferences are designed to advance our members’ leadership, and to help them influence great outcomes for their own organizations.

Digital nomads differ from remote workers in key ways, and their numbers are on the rise. Experts say companies have a few factors to consider when determining compensation for these itinerant workers.

Organizations can position themselves to avoid any whistleblowing issues with good communication, transparency and flexibility.

Compensating remote employees remains a hot topic and it was addressed at length during a session at WorldatWork’s 2021 Total Rewards Conference and Exhibition.

Please turn off any pop-up blockers before continuing.
WorldatWork Customer Relationship Services Chat will attempt to open up a new browser window to begin your chat.