It was early 1985. Bender and her husband bill were attending a showing of “Amadeus” at the south hills village theater in Pittsburgh.
The Academy Award Winner for Best Picture ran for 161 minutes and — surprisingly to Bender — included an intermission.
During this break, Bender was standing in line for a soda when she had a significant seizure, falling to the ground and fracturing her skull.
The fall led to an intracranial brain hemorrhage and resulted in a 60% hearing loss in Bender’s right ear.
Bender had epilepsy. But she didn’t know it until after she woke up in the hospital on anti-epilepsy medication.
She’d fainted many times before, and she thought those episodes were just “spells.” as it turned out, she had the sort of epilepsy that didn’t come with convulsions.
As she tells the story of that evening at the movies, she summed it up succinctly: “One seizure, one night.”

For the next eight years, she did volunteer work for the cause while working at an executive search firm. But in 1995, she went all in. That year, she founded Bender Consulting Services, a for-profit company dedicated to placing those with intellectual disabilities in advanced occupations.

She’s often asked why the company is for-profit.

“It’s for-profit for two reasons, the first of which is no pity,” Bender said. “People don’t need pity, they need paychecks. Pity is the ruination of everything for employment. And the second reason was that I wanted to provide a good health-care benefits program.”

Bender approached Bill Lowry, the former CEO of what is now Highmark BlueCrossBlueShield, to join her on this quest. She requested that  his company hire students from her program, while she would pay their salary and benefits. It took one day for Lowry to approve the deal. The program allowed Bender and her associates to eventually place intellectually disabled people in IT, finance, accounting and engineering jobs.

Bender is far from the only person on the front lines of this battle. One thing on which many of them agree, though, is that the stigma surrounding employees with developmental disabilities still persists across corporate America, 31 years after the passage of the Americans with Disabilities Act.

"The main hurdle is the stigma…no matter what, a lot of people have not worked with people with disabilities. It’s the belief that they can’t do the job. It’s pity. It’s much easier...to go to a foundation and ask for $100,000 than asking them to hire someone."

Chipping Away at Misconceptions

“The main hurdle is the stigma,” Bender said. “No matter what, a lot of people have not worked with people with disabilities. It’s the belief that they can’t do the job. It’s pity. It’s much easier for me to go to a foundation and ask for $100,000 than asking them to hire someone.”

According to the National Institute of Child Health and Human Development, intellectual and developmental disabilities (IDDs) are disorders that are usually present at birth and that uniquely affect the trajectory of the individual’s physical, intellectual and/or emotional development.

Many of these conditions affect multiple body parts or systems. Roughly 7.38 million people in the U.S. (2.28% of the population) have IDD.

David Hoff is the program director of the Institute for Community Inclusion at the School for Global Inclusion and Social Development, UMass Boston. The organization works with public systems and community agencies, as well as with families and individuals. He echoes the need to get past the greater stigma, which he attempts to combat by using a growing network of potential job placements.

“I view myself as being part of a social change movement, and what I realize in looking at social change [is that] absolutely nothing happens quickly. Nothing,” Hoff said.

“You just have to chip away at it, because you can get very frustrated, but have to recognize that, especially since the passage of the ADA, the recognition of people with disabilities is still a relatively new concept. For decades they were secluded away, in institutions, not allowed to work, not allowed to really be in the community. And there are still massive public policy changes that could happen, but we do have to recognize that there is progress. It’s slow, but steady.”

This understanding of the often glacial pace of change is part of working in the field. Peter Burns, CEO of The Arc, has learned that lesson as well. Burns doesn’t have any familial experience with the intellectually disabled. He spent his entire career in public service and joined The Arc in July 2008. He admittedly comes to the cause as an outsider. What struck him about those in the industry was the passion.

“Wow, once I got into it — and I think this is true for a lot of people who come into this work without that personal connection — the passion really catches you,” Burns said. “The people need us, the families depend on us.”

The Arc is described as “the world’s largest community-based organization of and for people with intellectual and developmental disabilities.” Burns and his organization work with people through their entire lifespans. Echoing many in the industry, Burns has seen firsthand just how much the history of discrimination and bias, both implicit and explicit, affects those who need help the most.

According to the Bureau of Labor Statistics, the employment-population ratio — the percent of the population that is employed — for persons with a disability decreased from 19.3% in 2019 to 17.9% in 2020.

“The media coverage matters,” Burns said. “The extent to which we see employers and HR people talk about it more, that’s something we consider success and hopefully that leads to more employment.

“Beyond that, it’s a lot of anecdotal information and individual success stories. The more we can report on success stories, the more attention we can bring to the issue and, ultimately, the more we’re thawing the hearts and opening the minds of employers to hire those with disabilities.”

The anecdotal information and individual success stories are key, of course. But it’s difficult for those in the field to truly quantify success. When asked what companies can gain from thinking more open-mindedly, Bender quickly pointed to a 2018 Accenture study that proves just how beneficial inclusion can be.

In the report, companies considered to be Disability Inclusion Champions were, on average, two times more likely to outperform their peers in terms of total shareholder returns compared with the rest of the sample. (These Champions were defined in the study as an elite group of 45 companies — among the 140 that participated — that excelled in the key categories of disability employment and inclusion.)

Accenture research also shows that companies that have improved their DEI score over time were four times more likely to have total shareholder returns that outperform their peers, compared to those that haven’t increased their score. In addition, the study found that the GDP could get a boost up to $25 billion if just one percent more of persons with disabilities joined the U.S. labor force.

“I say to companies, ‘If you want to see the best example of why you should hire people with disabilities, hire someone. Hire two people,’” Bender said. “That’s where the rubber meets the road. You can go around and talk about it, how great everything could be, return on investment and so on. But until you hire these people, you can’t change it and you won’t see it.”

Time to Take the Next Step

Kelly Nye-Lengerman is the director of the Institute on Disability at the University of New Hampshire. Her work supports the full inclusion of individuals living with disability in all aspects of community life. She agrees that misconceptions about IDDs remain a hurdle.

“Historically for people with IDDs, and even to this day, we don’t have an expectation as a community, as a society, that they can be full- or part-time workers in business in a meaningful way,” she said.

As a former social worker, Nye-Lengerman has experience in the field. She points out that the goal of social work is to help people at their core. But in speaking to businesses about employing those with intellectual disabilities, results are desired. As a job coach or a consultant, it’s the responsibility of people like Bender and Nye-Lengerman to find what the company needs and match the candidate with those needs.

“For many people with intellectual disabilities, they’re living lives that are controlled or dictated by other people, whether it’s parents or social workers, special educators [or] all sorts of support people,” Nye-Lengerman said.

Working independently, in a company or for a business where they’re answering to somebody who is not paid to take care of them creates a very different dynamic. It’s a hard thing to articulate to people who don’t work in disability services.

“The system that really was designed to care and protect people wasn’t needed, because they rose to the occasion that was in front of them,” Nye-Lengerman added.

“That’s more of a commentary on the disability services than anything, that we should be encouraging more instances for those with IDDs to live and work more independently.”

Part of that independence includes those like Hoff understanding the individual, what he or she hopes to accomplish, what he or she is capable of and then using that information when approaching the businesses. That marks the progress.

“We need to understand the business, what it needs, the work culture,” Hoff said. “And then figuring out how the person fits in. It’s not very different from how all of us look for jobs. And then once we understand, we negotiate a bit so the company can overcome the hesitancy.”

Many involved expressed optimism about what COVID-19 proved to employers. While it’s difficult to quantify numerically, and the true extent of change may not be known for years, many eyes across corporate America were opened to what’s possible.

“I hope on the other side of Covid that employers are more open to, and better understand, how supported employment and customized employment can be utilized because they’ve been doing it for their employees for about 18 months now. That’s the brightest hope I have.”

“What COVID has shown us is that almost all employees, in all industries, were given some form of supportive employment,” Nye-Lengerman said. “Whether it was a different workplace accommodation, alternative hours, changes made because you were caring for a family member or a child, we all were able to benefit from customized jobs and the support.

“I hope on the other side of COVID that employers are more open to, and better understand, how supported employment and customized employment can be utilized because they’ve been doing it for their employees for about 18 months now. That’s the brightest hope I have.”

A shared sentiment among most, if not all, in this field is the rewarding feeling it provides. Bender, especially, says she’s often asked when she’s going to retire. She has zero plans to do so anytime soon, going so far as to say, “I’m going to be doing this until the day I die.” Progress can sometimes be difficult to quantify, but those on the front lines of such an important cause will continue to, as Berns said, “thaw the hearts and open the minds” of corporate America.

“It’s really something,” Bender said. “I say all the time to companies, ‘You have the architecture. You have accessible restrooms, braille, captioning, wheelchair access. You spent so much money on this, I don’t know why. Because the one thing you don’t have is people with actual disabilities working there.’ And you should.’” 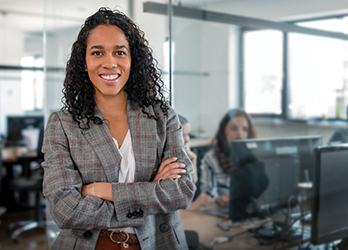